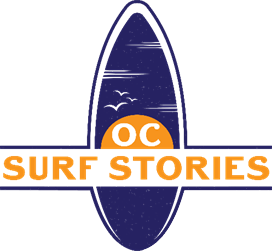 Popularized by Duke Kahanamoku in the 1920s, surfing was initially embraced by California’s lifeguard communities. As boards became lighter and easier to use in the 1950s, enthusiasm for the activity spread throughout California’s coastal beach cities. With the release of Bruce Brown’s “The Endless Summer” in 1966, surfing captured the popular imagination; quickly growing into a worldwide, multi-billion dollar-per-year industry.

Today, surfing remains an iconic characteristic of the Southern California lifestyle with Orange County widely regarded as a cultural center for its numerous technological innovations, the large number of accomplished surfers it has produced, and its role as a media center popularizing the activity around the world.

OC Surf Stories seeks to preserve Orange County’s surfing heritage by collecting and sharing personal experiences from our local surfing community: individuals who have witnessed and participated in Orange County’s adoption of surfing as a recreational pastime and as a lifestyle.

Hub of the Surfing World

Herbie Fletcher on Orange County’s importance to the surfing world.

Surfing Is My Art

Kevin “Mel” Thoman on bodysurfing at the Wedge, Newport Beach.

OC Surfers remember sneaking past U.S. Marine patrols to surf, “some of the best waves in the world.”

All I Wanted to Do

Competitive Side of Surfing

Competitive surfer Sheri Crummer on her lifelong connection with the ocean.

All Around the World

Paul Holmes on, “making a living out of a lifestyle.”

Every Moment of Every Day

To Take Off and Ride a Wave

Western Surfing Association Director, Mary Lou Drummy, on sharing the joys of surfing with the next generation.

Tom Morey on his lifelong love of surfing and the invention of the Morey Boogie Board.

The Fly (Pierre Van Swae) on the importance of observing wave etiquette.

Art Brewer on getting started in surf photography and his first published SURFER magazine cover.

Lucky To Do What I Do

Art Brewer reflects on Laguna Beach’s surfing community and his career as a professional surf photographer.

Mickey Munoz on developing the Hobie Catamaran and his continued interest in new surfing technologies.

T.K. Brimer on the joy of surfing and changes in surf culture over the past 50 years.

From Surfboards to Clothing Lines

Craig Lockwood on the origins of surf culture in Southern California.

Jeff Divine reflects on his career as a SURFER magazine photographer.

Along For the Ride

All Day, Every Day

Steve Pezman on surf culture and the raw appeal of surfing.

Steve Pezman on Orange County and the rise of the surfing industry.

The Reward Was Worth It

Pat Sparkuhl recalls his early affinity with surfing and his friendships with other Laguna Beach surfers.

We Were So Free

Pat Sparkuhl considers the influence of surfing on his appreciation for the Arts & recalls an incident at Trestles.

It All Started Here

Allan Seymour on being “the world’s worst surfer” and living (and surfing) in South Orange County.

R. Paul Allen on promoting “The Endless Summer” to sold out crowds in Wichita, Kansas.

R. Paul Allen on Orange County’s role as a surfing cultural center in the 1960s.

Jeff Bartlett shares his love of surfing and reflects on his experiences surfing in southern California.

Never Had a Bad Wave

Chuck Herpick on body surfing in South Orange County and what it means to, “Surf Life.”

Jack Saunderson, remembers his mother, Lucy, and her love of surfing.